Japan and China both provide development assistance to Southeast Asian countries and compete over it. In this fiend work I interviewed government officials of JICA and JBIC to get updates about their activities in Southeast Asia, especially in Indonesia and Malaysia which came up in the news recently. I also met with workers in Mitsui who shared their experience with infrastructure projects and ODA. Lastly, I collected data in JICA’s Library and exchanged information with an analyst in JARi. I was able to get new information regarding railway projects in Indonesia and Malaysia, better understand JBIC’s role and get a look at ODA from a private company’s point of view.

Japan has been providing development assistance to Southeast Asian countries for several decades. In the recent decade China has risen as a new actor in the field of development assistance, especially since 2013 (the announcement of the Belt and Road Initiative), which has led to competition between the two countries.[1]
In this research I aimed to interview JICA officials who work with Southeast Asian countries in order to get updates of their development assistance activities and the difficulties they now face, especially considering the competition with China. I also met with a JBIC loan officer to understand how they operate and what they do in order to help Japanese companies abroad. Additionally, I met with two Mitsui workers who both have experience with ODA, in order to understand how they perceive development assistance and the difficulties they encounter in the field. Lastly, I went to JICA’s library to collect data and met with an analyst at Japan Association of Rolling Stock Industries (JARi) in order to share information regarding research. 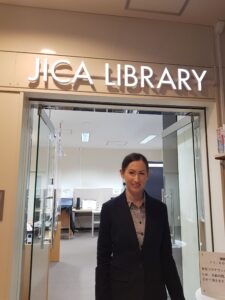 JICA Library in Chiyoda, Tokyo where I got access to documents such as feasibility studies. Image source: Shapira Shir

In this filed work I was able to get a view from a company involved in infrastructure and learned that there are infrastructure projects which are not suitable for ODA, as opposed to what I was told so far and there are cases of private Japanese companies ventures in infrastructure to Southeast Asia which do not involve ODA. Some such projects are seaports. On the other hand, in JICA, I learned that other infrastructure projects are almost always public, governmental projects, mainly because their cost is too heavy for private companies to shoulder. Such projects are railways, especially those involving hi-tech. In Indonesia, JICA is now working hard on the feasibility study for the Java-North line between Jakarta and Surabaya, phase 1 (30km out of a total of 90km). They will have difficulty with specifications for the project which will, on one hand, be as cheap as possible, and on the other, will limit the choice to Japanese companies (as opposed to Chinese ones).
In JBIC I learned how the loan officer work and what are the conditions for a loan from JBIC to SMEs. They give loans to Japanese companies who want to open a manufacturing plant (most open in Southeast Asia or China), or automobile companies, etc. They would even sometimes go to the production site for check-ups. Consortiums with Japanese companies can also apply for loans, but the Japanese company’s share of the consortium must be over a certain percent.
Lastly, I asked each interviewee if there is any change in policy since Prime Minister Suga entered office and all replied that there isn’t any as of yet. However, it may be too early to tell, considering he is in office only since September 2020 and that COVID19 pandemic puts a hold on many issues.

Following this field work, I plan to continue following the Suga administration for any policy change. I would like to travel to Tokyo again for more interviews with government officials and companies involved in infrastructure projects, in order to continue my research of their relationship and how each work to compete with China in Southeast Asia.

Estimating the Energy Composition of Diets with Foods Prepared from Cereal/Tuber/Nut-Based Flours in Mukono Town, Uganda

Research Background   Obesity is known to be closely associated with diet. A key objective of this study was to examine …